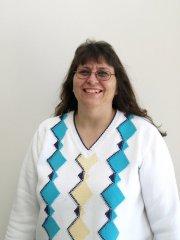 Pastor Tina Siroki I have served as a pastor since 2010 in East Ohio Conference and in Trinity United Methodist Church of Perry Heights since July 2018.  Prior to that, I was an application programmer for The City of Akron’s Information Technology Department.

My family grew up in the suburbs of Stow, Ohio where we attended and graduated from the Stow-Munroe Falls School System.  I was the co-captain for Stow High School’s field hockey team and played on co-ed softball teams.  I sang in choir and was involved in Latin and German Club for foreign language classes.  Once I was the Summit County representative in 4-H to the Ohio State Fair for equestrians.
At the University of Akron, I received a BS in Computer Science with Mathematics.  Then at Ashland Theological Seminary, I obtained a M.Div, MA in Biblical Studies of the Old Testament, and a Diploma of Christian Studies.  I’ve also had training in Bridges Out of Poverty and Clinical Pastoral Education.
Some of my hobbies include reading, attending educational seminars and conferences, walking my dogs (Charlie, my beagle, and Maddie, my Australian Shepherd), planting flowers, playing chess, and playing euchre.
Some of my employment in high school and college was making cotton candy and popcorn at Aunt Jeanie’s Popcorn Wagon at Chapel Hill Mall.  I lined baseball fields for the Stow YMCA while being a receptionist and groundskeeper. Then in retail I was selling footwear for Meldisco.  Later I was a computer operator and even worked as an educator through Mental Health America.
My favorite quote is:  “The world has yet to see what God can do with and for and through and in and by the man who is fully and wholly consecrated to Him. I will try my utmost to be that man.” -D.L. Moody
The thing that makes me the proudest is that God has worked through me and the churches that I have served to have new professions of faith and baptisms at every church.  My goal is that God will work through me more the second part of my life to grow God’s Kingdom.
My favorite part of the job is seeing lives transformed and seeing people grasp a new idea through preaching and teaching.