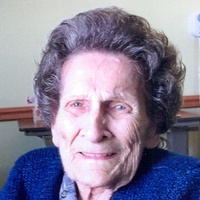 In 1915 the world was different than the one in which we now live.  In December of that year, Frank Sinatra was born, President Woodrow Wilson married Edith Galt in Washington D.C., WWI raged in Europe, heavier than air aircraft were still largely experimental, Ernest Shackleton’s team attempting to cross Antarctica overland was stranded as their ship, the Endurance, was crushed by the ice and sank, and into that world, Loretta Wynn was born in Canton, Ohio on December 3rd, 1915.
Loretta lived with her parents, John and Loretta, and eventually attended, and graduated from McKinley High School in 1934, and then met and married Glen Doll on May 27th, 1939. Before too long, Glen and Loretta welcomed Sally and Ted to their family as well and, in 1950 they moved from Canton to what was then a very rural Perry Township.  By 1955 they had joined Trinity Methodist Episcopal Church which would, in 1968, become the Trinity United Methodist Church.
Although they did a little camping and traveling in the early years, Loretta and Glen both liked staying at home and working the land, planting a garden, growing things, and then canning their produce.  They liked to design the landscaping for the two homes that Glen had built, and then, periodically, or perhaps continually, redesigning and reworking it to suit their tastes and their sense of style.  Maybe it was this sense of style that led Loretta into other adventures...

The full text can be found here: Eulogy and Obituary for Loretta Doll