I know that Charge Conference seasons is upon us, and I know that the Nominating Committee has started to meet and will begin, by the time you read this, to think about and ask people to consider their role at Trinity Church for next year.  But before we get too far down that road, I want to take some time to talk about our trip to The Joy Center.  I’ve written before about why we go on these trips and we’ve made lists of what we did, but I want to have a slightly different conversation this time.  While I will talk about what we did, I want to talk more about people than about projects.

Our team was made up of representatives from two churches, Trinity and Sugarcreek United Methodist Church.   Because of the generosity of our people, and the people of Sugarcreek, we were able to accomplish a great deal.  Many of us worked on one large project, a bridge, which was even larger than The Joy Center originally estimated.  Originally, we expected to build a 23 foot footbridge, but when we arrived at the worksite and started measuring, we discovered that to stay above the water all the way across the creek, we would need a much longer bridge and the finished product, including the ramps at the end, was 43 feet long.  We also worked on a kitchen remodeling project, as well as many small projects around The Joy Center such as weeding, cleaning, reorganizing, and of course, delivering another trailer full of donated goods. 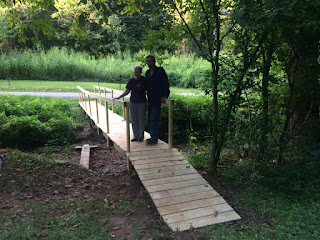 But again, that’s all about projects.  “Mission” is much more than that because a bridge, a kitchen, and these other things aren’t important by themselves.  The reason that these things are important is because of the people who need them and use them.  On our previous trips to Kentucky we met Paula who has been blind since birth.  Somewhere along the line, someone taught her to knit and Paula decided that this was the way that God had given her to be useful.  She knits constantly.  She knits prayer shawls and afghans, and over the years has knitted hundreds of prayer shawls which have been anointed, blessed, and given away as a tangible expression of God’s love to the people of their community, and to people around the world.  Last spring, the foot bridge that allowed Paula and Dennis to cross the creek and get their mail was washed away in a flood following some torrential rains.  While Paula is blind, her husband Dennis gets out of breath walking across his yard or around their tiny house.  Without a bridge, Dennis had two choices; climb down into the creek, cross the creek on a plank that he rescued from the ruins of his old bridge, climb back up the other side, get his mail, and then do it all over again to get home, or follow the driveway past his house and past two neighbors’ houses, to the next bridge, then walk up the road that same distance, and then go back the same way.  Our bridge means that not only can Dennis get his mail, but now Paula can use it to meet her ride to the Wednesday women’s Bible Study.  Holding tightly to Dennis on her first trip across the creek, ever, she was so excited and kept saying, “It’s so long!”

We also spent a day putting up a ceiling and walls in a kitchen and dining room but again, it was the people that made that project important.  Sue has always been the caretaker of her family.  She takes in kids without parents, takes care of her siblings, in laws, and anyone else who needs help.  When her sister needed a place to stay, Sue invited her sister and her family to move in and Sue’s husband started dividing their house in two.  He built walls and started building a new kitchen, bathroom, and laundry room, but just as he got started, he suddenly died.  That left Sue with half a house and about twenty unfinished projects that she didn’t have the skills to finish.  While we didn’t have the skills or the time to finish all of them, we made a dent and made her house just a little more livable.

Something else we don’t often talk about is what we do when we aren’t working.  While a team is working, someone is often taking a break.  Depending on age, or ability, or the availability of tools and materials, someone is often resting, or waiting.  At one point while two of us ran into town (between the driving and the shopping we were gone for two or three hours) most of the team had nothing to do.  But during those times, we sit with the people, and their families, neighbors, friends, or whoever stops by, and we talk.  We talk about our lives, about their lives, we tell stories, we tell jokes, and sometimes, when it’s appropriate, we talk about church and about Jesus.

So you see, while our trips are built around projects, they aren’t really about projects… they’re about people.  Since many of the people we talked to (and even more who watched from a distance) don’t go to church, our projects were just a door that allowed us to have a conversation.  Our projects, even at The Joy Center, were a way for us to show the people of Big Creek and Clay County, Kentucky that they aren’t forgotten, that people care about them and love them, and most importantly, that Jesus loves them and has not forgotten them.

At the Joy Center, all those smaller projects reminded the staff, the volunteers, and everyone at the Big Creek Church that they aren't forgotten and Jesus and his church still love them.  Thanks to the generosity of Goldie Bolitho and our Trinity quilters, the crafters at Big Creek Church will have enough supplies to keep them busy for months to come and they’ve hidden away enough yarn to supply Paula’s knitting for most of the next year.

Although we often talk about money or about projects, in the end, mission is always about people.
Won’t you consider being a part of what we are doing here at Trinity Church?

No matter who you are, you can make a difference.
Posted by John Partridge at 9:23 AM